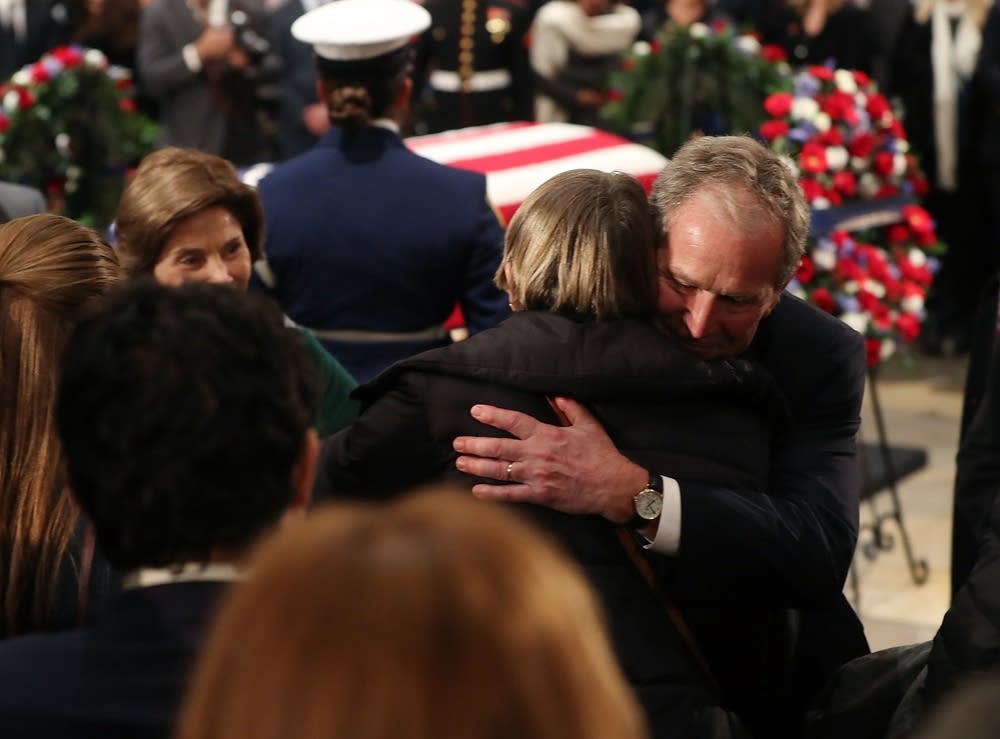 This was originally published on Medium

George Herbert Walker Bush passed away last week and the news stories were flooding in across the channels — no matter your political leanings.

I watched and listened to what the anchors were saying on various channels so I could take it in. I noticed my throat was getting tight and I was getting teary. Usually when this happens, I take notice because it means something is shifting inside me and I need to start to ask the questions around what’s happening for me.

I wondered, I didn’t know the man. I empathize that this family has lost both parents in a matter of 7 months and that the holidays will be different for them this year. I remember it was for my family when we lost my parents 4 months apart from one another. While I was happy for them, their loss still weighed heavy on me — especially at the holidays. It’s been 5 years now and the sting is less. Was that it, I wondered, was that what was triggered for me? Maybe a little. I do know what it feels like to lose your parents so close and I remember distinctly what the holidays felt like even up until last year.

I continued to ask myself to dig deeper. Why else could I be reacting this way?Why was grief being so stirred in me? I don’t know the Bush family. I did hear Bush 43 speak in September at The Nantucket Project, a gathering of people of very mixed political views who come to hear about what people are doing to make the world a better place in their own way. Bush 43 was able to cut across every different political view and offer comfort to the crowd assembled, acknowledging that we were living hard times and that he still felt encouraged, because we’re Americans. We’ve come through hard things before and have been better for it.

Jim Baker, his long time friend and former chief of staff and secretary of state, said “He led with strength, integrity, compassion and humility — characteristics that define a truly great man.” Countless other tributes, acclaiming his role in the end of the Cold War era point to his compassion, integrity, leadership and kindness.

There it was. I was triggered by the loss of a leader who at their core was humble, compassionate and kind. I didn’t want to lose that. He was a great role model no matter how you vote or whether or not you liked him when he was president.

I feel like we’re being called to bring kindness back into the arena. Bring it to the foreground. It seems to have lost its place in politics and in our daily interactions although if you’re looking for it, you’ll find it if you’re feeling like me, too. I witness great kindnesses still — every day, because that’s what I am keeping my focus on these days. It’s what props me up in our current climate.

I have great hope like W said. We’re Americans and we have a history of coming through hard times. My challenge to you is how will you go about bringing it to the foreground? You can even cross party lines on this one and be safe! Kindness has my vote and I feel better now that I drilled down on my feelings. I know I have the capacity to start an interstellar shift of humanity in my own back yard and that’s my plan. I’m starting with me so I can model it for my family and start the contagion. Wanna come along? Come, dare greatly and fuel the shift!

About the author, Andrea

Wife, mom, Appreciative Inquiry and KINDNESS practitioner who is interested in the intersection of home, school, work and play.

We’re starting something special here and I am so happy to share this journey with you!

Together, we’re a step closer to bringing kindness and civility front and center across contexts.

Before we went to kindergarten, we learned from our first teachers at home.

It’s not too late to ask new questions to prime our internal and external environments for kindness and to increase our connection to one another.